″Till we have a fair peace″

″Till we have a fair peace″

Translated from the German by Ruth Martin

Mitri Raheb is a Lutheran pastor and Arab Christian and the founder of the International Center of Bethlehem. Martina Sabra talks to him about Luther's influence in the Middle East, the chances of an Islamic Reformation and accusations of anti-Semitism

In 2006, you created an Arabic-language website about Luther: Luther in Arabic.org. What were your intentions – who were you aiming to reach?

Mitri Raheb: We wanted to provide information about the Lutheran Church to a wider public in Palestine, particularly the younger generation. There are several Lutheran schools in the West Bank and we also observe the Protestant holidays. A lot of young people have the day off on Reformation Day, but they don’t know why. 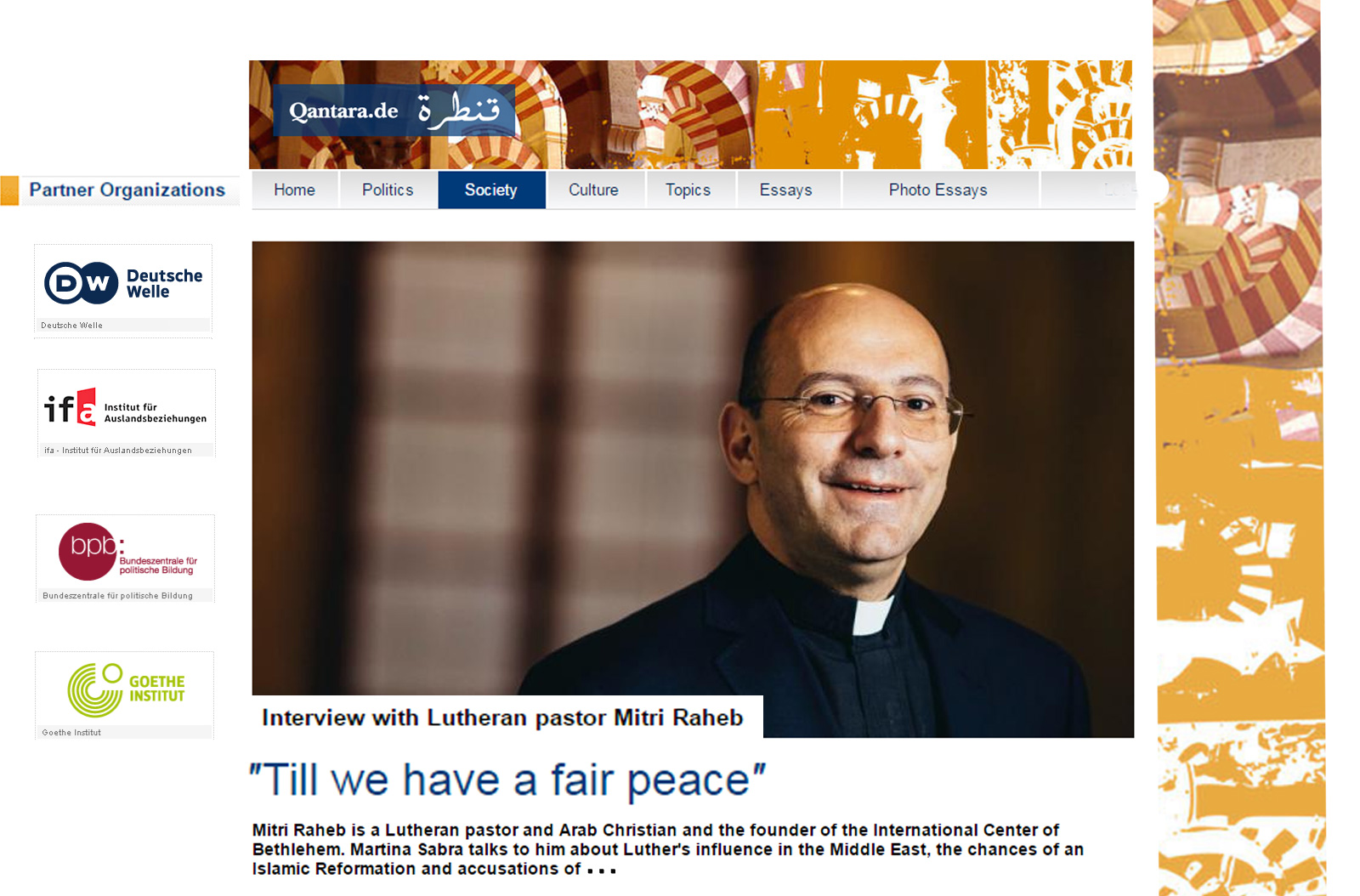 How has the presence of Protestants in the Middle East developed?

Raheb: The history of the Evangelical Church here in the Holy Land began in 1841. Prussia and England originally wanted to found a joint Lutheran-Anglican Church in the Holy Land. That worked at first, but political and theological differences meant they parted ways in 1886. Today, around 10% of Christians in Palestine are Lutherans, though Christians in total make up only around two percent of the Palestinian population. We are a tiny minority of 3000 or so believers.

Despite being just a small section of the population, the Lutherans have a relatively large cultural influence. What’s your assessment of that?

Raheb: In the West Bank, we have a total of five schools and a Lutheran university, the Dar Al Kalima in Bethlehem. We also run the Ad-Dar Cultural and Conference Center which is part of the Diyar Consortium. Education work has always been very important for Lutherans in the Holy Land. We founded the first schools to exist in this country, of which many leading Palestinian politicians are former pupils.

How have the tenets of Lutheranism been adopted here? What differences are there compared with Germany and with Europe?

Raheb: The Lutheran Church did pioneering work in Palestine: from the very beginning the liturgy was read in Arabic. All the Christian denominations prayed in foreign languages: the Catholics in Latin, the Orthodox Church in Greek, the Syrians in Aramaic and the Armenians in Armenian. Admittedly the Melkites did speak a mixture of Arabic and Greek. The Lutherans, however, were also the first to introduce a sermon during a Christian service. Then the question arose as to whether the congregation should discuss the sermon. The Lutherans also replaced some of the rituals, like incense, the sometimes excessive adoration of the Virgin Mary and the belief in spirits, with what we call a "thinking faith". This is still perhaps the most important hallmark of Lutheran spirituality in the Holy Land, this thinking faith, far removed from anything that doesn’t stand up to reason.

Mitri Raheb: "The Islamic world needs someone like Luther, who questions God - in God's name. Luther worked on the principle that he had revealed an original understanding of God, independent of external factors. I think that, in part, this is exactly what the Islamic world is struggling with. It's about creating a new understanding of religion, an Islam that isn't reduced to laws and rules"

How did the traditional Christian communities in Palestine react to the Lutherans?

Raheb: To start with, it was a battle: the Protestants placed a lot of emphasis on their anti-Catholic and anti-Orthodox feeling; the other side was extremely anti-Lutheran. Devotion to the Bible has always been very important to the Protestants. That’s why they founded schools, so that people could learn to read the Bible. The Evangelical Christians were famous here for knowing the Bible much better than the long-established Orthodox priests, some of whom had never read the Bible in their lives.

With relation to Islam, people keep suggesting that Islam needs Enlightenment and a kind of Luther. Some Muslim critics of religion or religious reformists have already been described as "The Luther of Islam". You yourself, Mr Raheb, are a member of a minority within a Christian minority, in a society shaped by Islam. The majority of Bethlehem’s population is Muslim. What do you think of the idea of an "Islamic Luther"?

Raheb: I follow these debates with mixed feelings. On the one hand, I think it’s risky to say that the whole of world history should follow the European model. That is one of our fundamental problems, you know, this Western superiority complex. But on the other hand, I think the claim is justified. The Islamic world needs someone like Luther, who questions God - in God's name. Luther worked on the principle that he had revealed an original understanding of God, independent of external factors. I think that, in part, this is exactly what the Islamic world is struggling with. It's about creating a new understanding of religion, an Islam that isn't simply reduced to laws and rules.

Is there a chance of an Islamic Reformation?

Raheb: Absolutely and I can think of a few Islamic philosophers whose thinking tends in that direction. But we shouldn't just look at individuals; we should look at the historical context. In a sense, Luther appeared at the right time, it was a kind of Kairos moment. Germany and Europe were in a state of flux and humanism, the sciences, the political situation, the printing press – all these things contributed to the success of his ideas. Without the right political context, Luther would just have been a monk with big ideas but no impact. This perfect moment hasn’t yet arrived in the Arab Islamic world. The time is not yet quite ripe.

Openly critical of the Israeli occupation: two months ago an international group of Catholic bishops concluded a visit to the Holy Land with a call for an end to Israel′s fifty-year occupation of Palestine. "This permanent state of occupation is detrimental to everybody – both occupiers and the occupied," declared the German Conference of Bishops representative, Bishop of Trier Stephan Ackermann

Martin Luther sometimes adopted anti-Jewish positions, for which he gave theological justifications. As a Lutheran in the Israeli-Palestinian context, what does it mean to engage critically with the anti-Judaism in Luther's texts?

Raheb: It means that you don’t make your mark as a Christian by speaking ill of others. We have to expose anti-Judaism, just like any form of Islamophobia or xenophobia. You have to recognise that there are divisions within the monotheistic religions as well as between Christianity, Judaism and Islam. Religious plurality is essential today and we should embrace diversity. Anti-Judaism is not the only kind of religiously-motivated hatred. There are also Evangelicals who interpret the Holy Scripture as anti-Palestinian. They evoke God as "the God of Israel", to justify war against the Palestinians. They turn the Good News (evangelium) into bad news for us, as Palestinians. That's not acceptable either and we have to stand up against it.

You’ve been accused of anti-Semitism because of your theology of Palestinian liberation. How do you deal with this kind of accusation?

Raheb: These days anti-Semitism is used as a charge to halt any criticism of Israel. People who don’t want to enter into a debate about the Israeli occupation try to silence critics with these accusations. But there is only one lesson we can take from Auschwitz: we must have the courage to call the oppression of a people by its name and not immediately take the side of an unjust state. That's why I'll keep talking, until we have a fair peace. 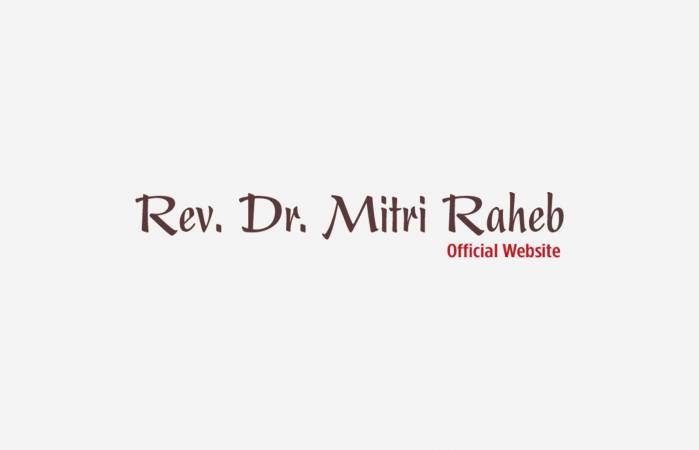 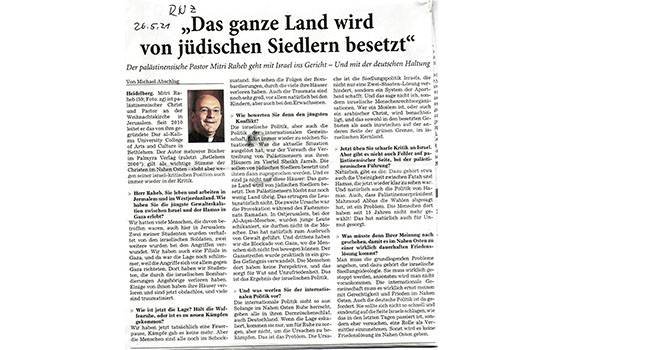 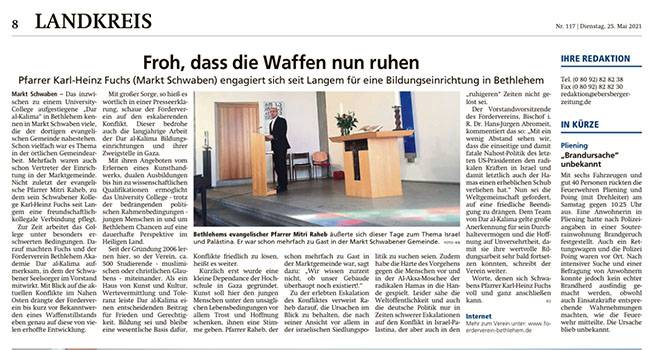